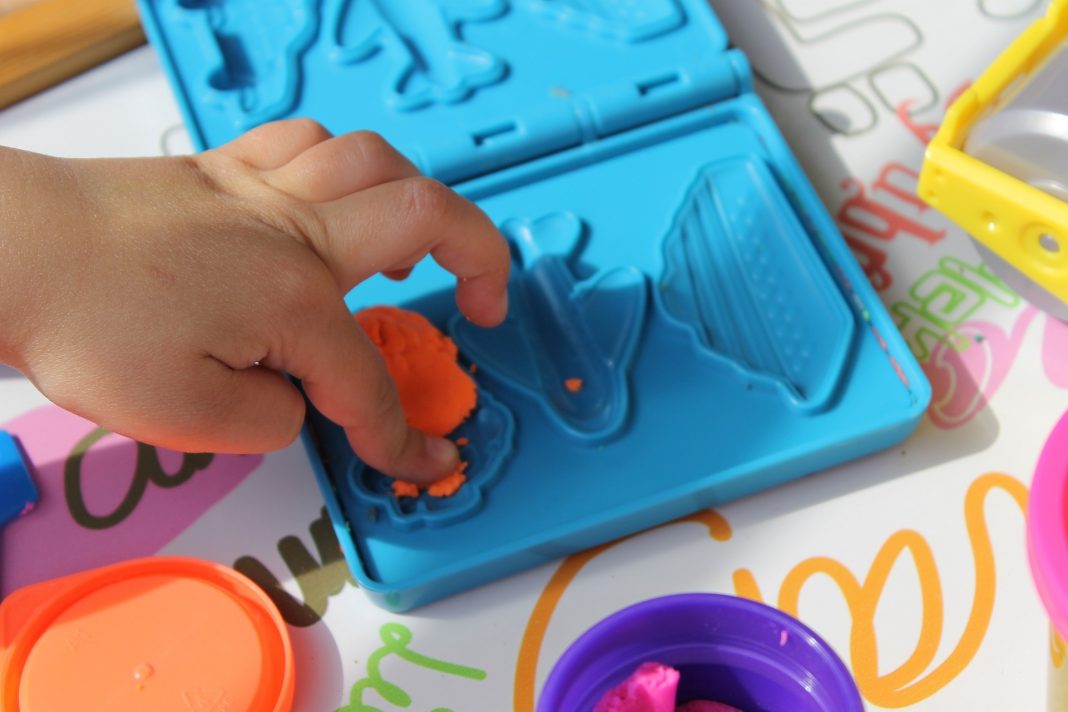 Transforming a challenge into a solution is something my mother has often succeeded in. One of my first memories of this trait occurred on a rainy day in 1979. Head tilted chin in hand, a look of forlorn on my freckled cheeks, Mom walked into the kitchen and found her kindergartner sulking and counting raindrops. The family dog had run out of outfits to be dressed in, and Sesame Street wasn’t due to come on the television for a couple more hours.  So, in her can-do fashion, she grabbed some flour, salt, and cream of tartar out of the cupboard, added some warm water from the tap, and had my hands deep in magic: homemade play-dough.

“Make whatever you want,” Mom said. “And when you’re finished, you can make it into a figurine.”

So, Mum worked on her figurine and I worked on mine. Hers was precise: an old gent, with a cane, a facial expression to top it off and make it authentic, and his loyal dog at his side. Mine appeared as a mammal of sorts with floppy ears.

The designs ‘done’, it was time to stick them in the oven to bake and set forever.

The magical outcome was a toy I had made from my own hands, the thing was, the animal did not bend, it couldn’t stand without support, its inflexibility had started to lose my admiration. Had the play dough been left in its flexible state, I could have created so much more.  I think this trait of flexibility can be equally admired in today’s CEO/Founders.  Nevermore so, when a private equity buyer is ready to invest in the business.

So, I asked Mom if she had any more dough left and she said she had saved me some in the fridge. Mom, always the forward thinker.

Flexible, creative, transformational, decisive, forward-thinking, these are the traits that today’s CEOs must possess, but also traits that a CEO should expect in their C-suite and their employees. If flexibility does not exist, then the other list of “must-have” traits will be null and void.

CEO turnover at a record high

Whether a planned and successive CEO or one plucked from outside the business, are you on the same page as those that really call the shots- the investors and majority shareholders?

The iconic CEO/Founder exit of CNN and Time Warner’s Ted Turner when he was reportedly outmaneuvered by AOL chief Steve Case back in 2001, shows the ugly side of CEO shake-ups, which collectively cost companies millions.

In a Guardian news report, Ted Turner was quoted, “I’m in spiritual and mental pain. When you’ve worked to build a company for 40 years and you know all the people there, and one day it’s gone, well, that’s a hard transition for anyone. It’s like taking your pencil away and telling you you can’t write anymore.”

Turnover among CEOs at the world’s 2,500 largest companies soared to a record high of 17.5 percent in 2018 — 3 percentage points higher than the 14.5 percent rate in 2017 and above what has been the norm for the last decade, according to the latest PWC Strategy& CEO Success Study

Percentages of the types of turnovers — planned, forced, and M&A-related — remained in line with long-term trends, said the report. Planned successions continued to account for more than two-thirds of all turnovers.

Even UK serial founder-entrepreneur, Tom Savage, admits the “CEO-ing can be learned” such as in the case of Google founders, Sergey Brin, and Larry Page.

That may mean the CEO training to boost their skills base or any weak areas, take on more debt to acquire assets in new markets, etc. But more often than not, CEOs are replaced, as much as 73%, soon after a private equity investor comes on board or a company goes public.

There are the exceptions- Bill Gates- and then there are the invincibles- such as Martha Stewart- who will follow a company’s growth, and its change in owners, but know when to step to the side, yet still have the opportunity to stay on the board, to let someone else come and do the “mundanities of running a business”.

I would say the one commonality, besides the given trait of reliability, is flexibility or adaptability so that the company can become a better version of itself.

The sooner a founder/CEO admits that things cannot go on, as usual, the better.  Think about it, if a CEO wanted things to go on, as usual, they wouldn’t have brought on new investors, especially ones with heightened scrutiny. The CEO/Founder that wanted to keep the control or perhaps family members in control-which is their right- may have passed on the offer. But once you cross the threshold, as a CEO with new investors, you will need to be calm in the face of change.

If you truly want to continue as CEO, post-private equity or IPO, you must figuratively pop open that lid of Play-doh and flex into the authentic CEO that will take the business to the next level of growth.  The very history of Play-Doh is all about adaptability and transformation for growth and survival.

According to Jeff Seibert, founder of Increo and Crashlytics (companies he exited and helped grow further at acquirers Box and Twitter), writes in a Hackernoon piece, “As the founder/CEO, you have one job: look at where you’re spending your time, then fire yourself from that position.”

His advice is if you are lucky enough to be a Jack-of-All Trades CEO, you must know when to hire someone else to take over certain responsibilities, especially if they are better at it than you are.

But what happens if you are asked to step down or leave?

According to Seibert, “The founder has no choice but to start in whatever role is most necessary for the company to exist.”

He also suggests that a CEO/Founder should use their know-how of all the different components of the business to empower staff to make the business the best it can be with the given resources.

Seibert suggests taking the ego out of the CEO’s role.

“I like to picture my org chart upside-down,” says Siebert. “They don’t report to me. I report to them. What do they need to succeed at their roles?”

Defer decisions to staff, so they feel empowered and entrusted with the success of the business, he suggests.

This can only improve accountability. But there is always a place for mentors to fill in the gaps. And budgets can be strained, and not all staff, will get what they request.

Sure, my permanent creation that came out of the oven was a brilliant yet short-lived diversion on a rainy day. But that reserve of flexible magic Mom had waiting in the fridge for me to discover was ten times the value.

I guess the moral of this CEO character story is not to stifle your vision, your insights, and your company’s future by becoming that inflexible piece of dough, put the ego aside, whether you are looking to sell stakes in the business or not.

Your potential investors and management team will thank you for it. And if you play your cards right you might just stay for the journey, that is, if that is your grand plan.

BuzzVestor Media will also be exploring in an upcoming article the benefits and challenges of CEO/Founders pitching to and bringing in a family office investor versus the more common private equity investor, or going public.